There’s been a lot of buzz recently about the big AdWords shakeup.

The news has been reported in SearchEngineLand and now Moz.

And what exactly has happened? Well, in the biggest change in years, Google has finally removed the AdWords ads in the SERPs from the right hand side of the desktop. To make up for the reduction in sidebar ads, there are now four ads at the top of the page.

The SEM Post identified the global rollout, first I heard, on the 19th Feb. Their evidence is from advertisers’ conversations with AdWords reps.

Then SearchEngineLand confirmed the changes of the rollout later in the day. They believe the Google tests have been ongoing since as far back as 2010!

A few days later, Dr Pete over at Moz.com then posted a further confirmation, saying that the side ads had completely gone by the 23rd of February.

If you ask me, this is all part of Google’s move to drive toward a mobile web. Usage stats are probably still on the up and up for mobile vs desktop and removing side ads makes for easier viewing on mobile devices.

One thing I’m not happy with, however, is that 4 ads on the top of the SERPs will push organic results further down the page. Don’t get me wrong, PPC is an integral part of my digital marketing mix but I’m still a big believer in organic search results.

Cynically, I bet this is great news for Google too because, whilst losing all the side ads and supplementing with fewer replacements at the top, I bet that they’re still making a killing.

Additionally, it adds credence to the old yarn from certain SEO practitioners that they can “get you to the top of the search results”. Isn’t it so much easier now to get a “top 4” listing in the SERPs?

So, on a positive note, I expect any PPC campaigns to produce even more positive results, now that we can dominate the top 4 slots. It’ll cost you, though 😉

I was just checking the SERPs for a page I own that sells Opel Manta Books and I notice that, as well as not being in the number one slot, like I was for many years, the standout thing for me was that there *are* search ads on the right-hand side of the desktop. Look at this screengrab I just took: 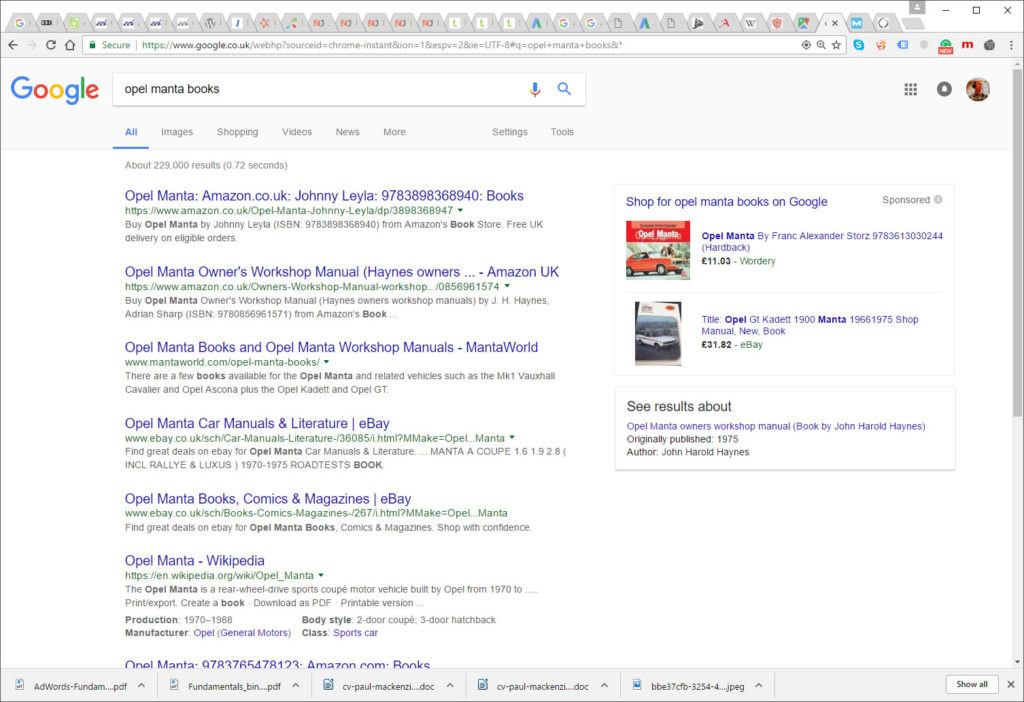 No search ads on the right? Really?

Those are very clearly some search ads on the right-hand side there, so have Google brought them back? Why?

Of course, there are no ads on the top but this is a result with a good visual so it would make sense to be on the right on the desktop.