Hatchet Job on a Hacker 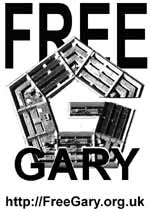 Personally, I think Gary McKinnon has already served his time. Hacking into US Military computers back in 2001/2002 Gary McKinnon was only looking for information on UFOs. With all the rumours and speculation, call them conspiracy theories if you will, he was merely being inquisitive and I think many people would have been tempted to do so too given the opportunity. Afterall, there is a whole generation of us who were spellbound by the 1983 Matthew Broderick film Wargames.

Of course you’re playing with fire these days when David hacks into the highly classified systems of Goliath, but Gary McKinnon was hardly hardcore, and neither were the systems he accessed. The U.S. Military only had the most basic of “defences” on their own “Top Secret” information and Gary McKinnon gained access to many of the files on machines of the world’s greatest military power with the default username:admin, password:admin, the most simple and obvious combination anyone could use.

Then there’s been the long-drawn out six year wait whilst the Pentagon tries to extradite Gary McKinnon; indicted in November 2002 he’s been waiting ever since to be extradited to the U.S.A. where he will stand trial for hacking into 97 computers and could face up to 70 years in jail.

It’s all utterly ludicrous and just as Guantanamo Bay prison camp has been suspended by the new President Obama you’d hope that this other blot on the American Military character should be dealt with too. Afterall shouldn’t the U.S. Military be THANKING Gary McKinnon for highlighting the failings in their system and not going out to destroy him, to make an example of him? The U.S. military claim that nearly a million dollars worth of “damage” was done to those 97 machines. Well that’s a drop in the ocean considering that it is estimated that the Iraq War costs $2 billion a week! $700,000 – $800,000 is a lot of money to change passwords – I’d be happy to work for the Pentagon on those rates of pay.

The Military have gone too far with this, like a rabid inbred fighting dog with its jaw locked on the leg of a passing pedestrian, they just will not let go. For six years this superpower, this military machine has been tenaciously pursuing this British hacker, this one citizen, just one man. I think that the biggest problem is that they were and still are completely EMBARRASSED by this situation; a regular Joe snooping around NASA, DoD, Navy, Airforce computers! And it would have been much better for everyone involved if they’d just allowed Gary McKinnon to stand trial in the UK and serve a short but exemplary time in jail, after all he HAS admitted his crime. Where is the crusade to bring to heel those who set the passwords, why aren’t those people being so vigorously pursued for being so lax in allowing such easy access to systems of national security?

The latest news is that he has won the case to review the extradition proceedings, so he *could* stand trial in the UK. But after 6 years, as I said at the start, I think Gary McKinnon has already served his time.

UPDATE 2009/01/29: Two days after I posted this article this is what Boris Johnson had to say on the matter.

2 comments on “Hatchet Job on a Hacker”