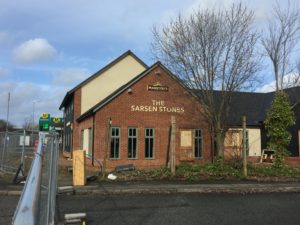 So we’ve lost The Tumble Down Dick, The George, The Queen’s Head, The Imperial Arms, The Potters Arms, The Old Courthouse and The Ham & Blackbird.

One of our pubs was infamously turned into a fast food restaurant (a very sore point and a personal one too), one was defiantly demolished and now sits as a pile of rubble, another was turned into a Tesco Express, one is still standing empty and the others have all been replaced by multiple dwellings i.e. blocks of flats etc.

What has always pissed me off about the loss of our local pubs is this:

So I have many problems with the loss of our pubs. And I feel powerless to do anything about it. The landowners know that too, hence why The Tumbly was so cynically allowed to be neglected and The Ham & Blackbird so belligerently destroyed.

But am i  being the cynical one here?

We have new pubs in Farnborough. The Tilly Shilling. Right underneath the Travel Odge where visitors try to get a good night’s sleep. Or how about The Gloster, another Hungry Horse establishment. I’ve visited these new pubs maybe a couple of times each. They really don’t appeal to me in the slightest.

But we do have The Sarsen Stones, Farnborough’s new pub in Summit Avenue, Southwood. It’s a Marston’s pub. It’s new, and it’s been touted as a “hub” so this could be better than the Wetherspoon or The Hungry Horse. So let’s wait and see.

I look forward to visiting it, even if it is just the once.

And what’s in a name? The Sarsen Stones? Well that’s down to the local stone circle, Farnborough’s very own Stonehenge. And where’s that, you might ask? Well, all the local yokels pulled that down years ago. There are Sarsen stones in the walls along Victoria Road and supposedly there was a stone circle nearby from which these stones came.  I was once told Cove Green but it may have been on the site of Farnborough Hill school.